This time last week I was dashing about the Caithness wilderness looking at my bucket list of archaeological sites. One of these places was the Acharole ‘stone circle’ which is situated about 5.85 miles (9.41km) to the NNE of the Achavanich burial site. A site which I've had my eye on for a long while now…

The short 2.8 mile (4.62 km) length of road along the Acharole burn is littered with prehistoric and historic sites: cairns, hut circles, two brochs, a chapel and burial ground, a watermill or two, as well as a number of ruined and surviving farmsteads. But it was the stone circle and the mysterious non-existent remains of a cist burial that I was here to investigate. 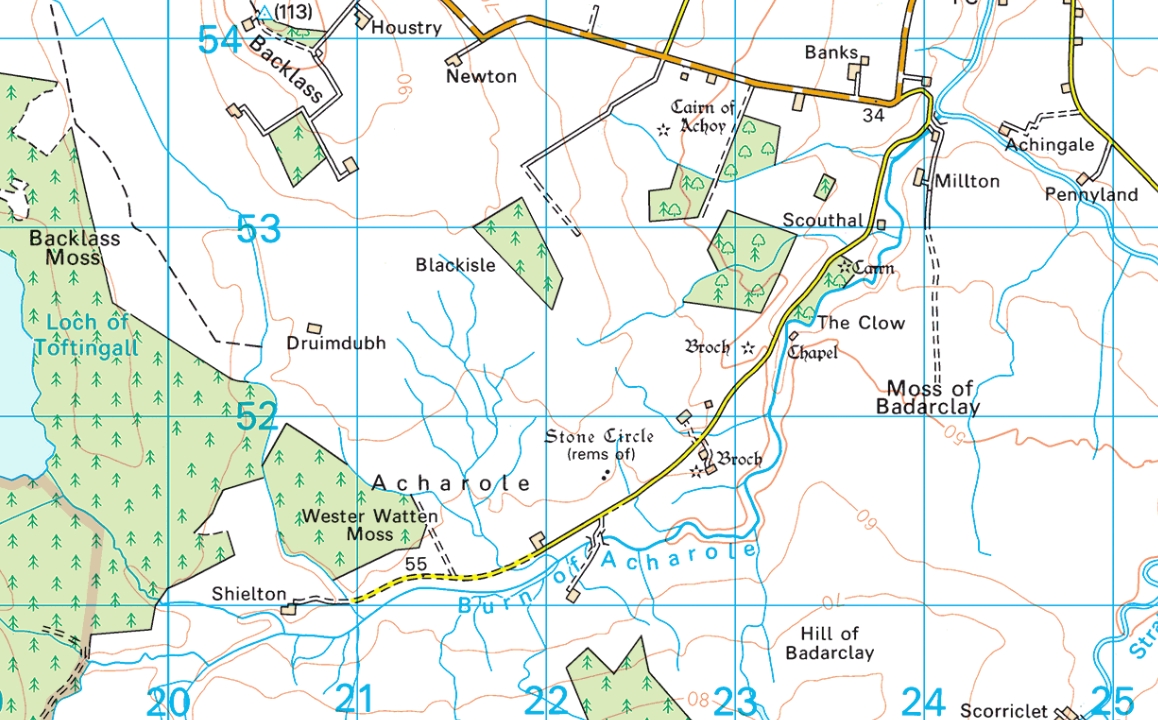 I could see the main stone from the road, and short hike through a grassy field later, I was there. Only two large stones of the original ‘stone circle’ survive: one rests on its side, but the other remains upright. What happened to the rest of the stones, if they were ever there, is uncertain. The earliest record of these other stones is in the Caithness OS Name Book of 1871-1873 (vol 12, p. 108) which reads:

“A good specimen of the standing stones of the district – it is about 4 ½ feet high and situated on slight eminence a few smaller ones are near it which have probably been standing at one time – now partially sunk in the ground.” 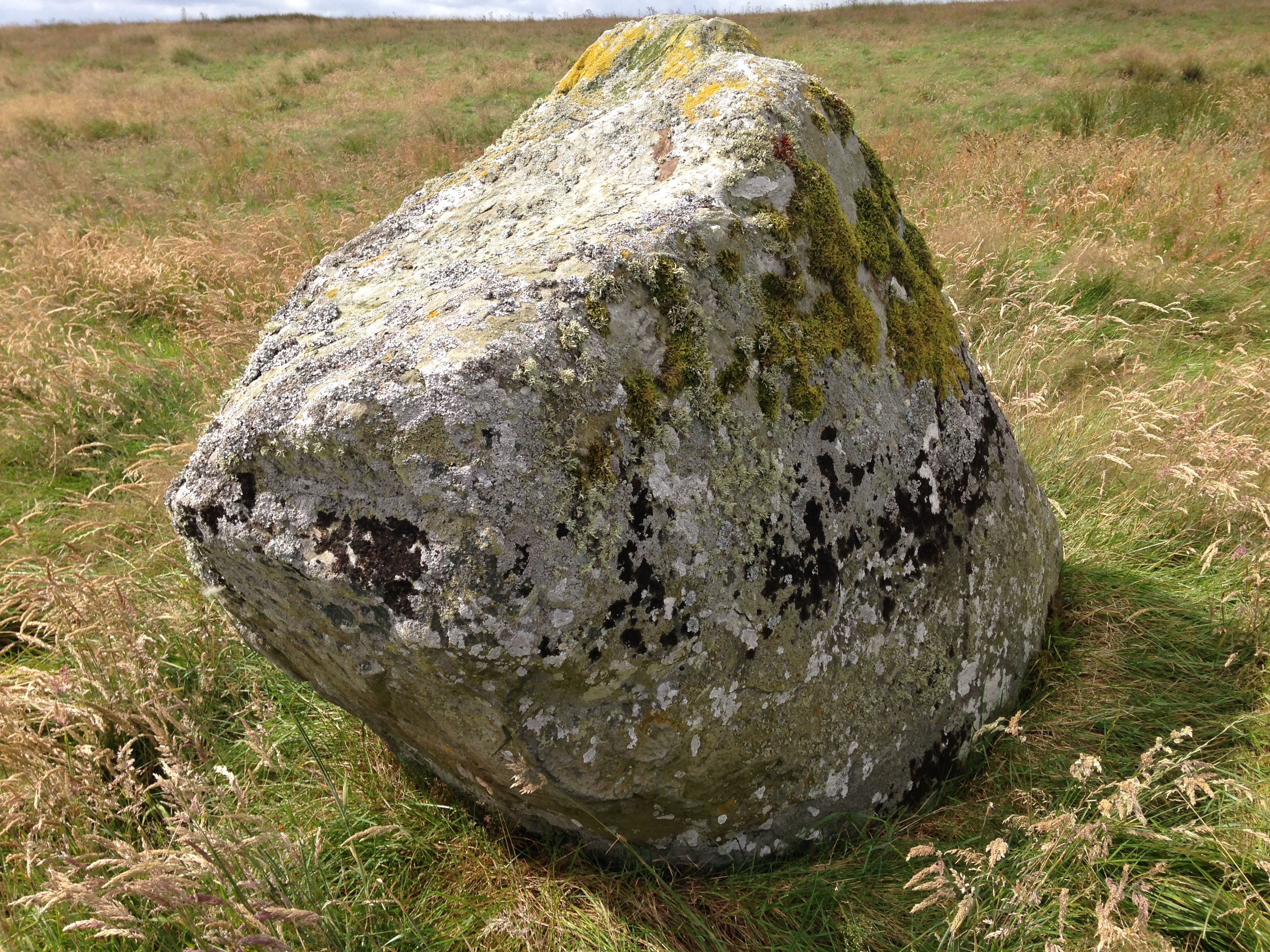 The two stones that survive are impressive beasts and would not have been, by any stretch of the imagination, an easy task to manoeuvre to this position. They have been placed halfway up a gradual slope rising to the north of the Acharole burn on a small flat plateau, which continues to rise beyond. 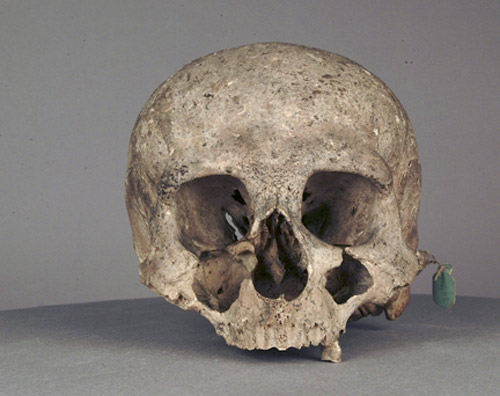 I’m particularly interested in this site because of its association with a known beaker burial. The Acharole, Cnoc Sgadain cist was found in August 1904 by a man called Robert Sutherland who was excavating gravel from a pit, near the standing stones. He wanted to use the material to mend the road on the hill at Acharole. He accidentally uncovered a Bronze Age cist containing the skeletal remains of what was believed to be a young male, buried with a complete beaker vessel. The skull was described as “very round” and that the individual would have had a “broad face”, traits considered common among the beaker people. The beaker itself was highly decorated with a mixture of bands containing vertical, horizontal and diagonal lines making a mixture of criss-cross and zigzagging patterns. Unfortunately, due to indelicate handling on removal, the beaker broke into multiple pieces. It has been carefully reassembled and is now cared for by National Museums Scotland in Edinburgh. I was in fact once lucky enough to get a glimpse of it when visiting Dr Alison Sheridan (Principal Curator of Early Prehistory) at National Museums Scotland last year. The skeletal assemblage was analysed by one of the most famous antiquarians active in Caithness at the time – Sir Francis Tress Barry – and is now stored in the Hunterian Museum in Glasgow. My mission was to find evidence of the quarrying activity that revealed the burial and if discoverable, would indicate it's original location.

The cist and the standing stones are linked by a remarkable painting by a local expert in Caithness prehistory who was well-known for his art work and who devoted his life to the exploration and understanding of the counties archaeology: John Nicolson. This image was painted just after the cist was originally discovered. If you look carefully at the painting, in the upper left hand corner you can see two stones, one upright (on the right), the other on it’s side (on the left) – which look exactly like the Acharole standing stones.

I wanted to see if I could find any evidence on the ground of the remains of the quarrying activity that exposed the cist. I wanted to do this because if I could line it up with the stones, I might be able to identify which direction was north in the painting. If I could tell which way was north, then I could tell if the burial layout – and more specifically the position of the body – matched the common layout trend we are seeing across the country for male beaker burials: crouched with knees close to their chest, placed on their left hand side, with their head to the east, facing south/south-east. This is in contrast to female burials which tend to be crouched with knees close to their chest, but placed on their right hand side, with their head in the west, facing south/south-east. This work has been carried out by Alexandra Shepherd who has examined numerous burials from Yorkshire and Aberdeenshire which generally fit this pattern.

By examining the location of the cist and the standing stones, and comparing these to John Nicolsons painting, it appears the image must have been painted facing North-west. This means that the individual buried inside was positioned as follows: crouched with knees close to their chest, with their head in the east, and facing south. We can tell this by examining the content of the grave depicted in Nicolsons painting. This is typical of a Shepherd’s male burial pattern, and helps – as I had hoped it would – reinforce the idea that this was indeed a male burial, and that this site fits into the wider burial practice we are seeing across the UK.

So, why am I so interested in this site? Well, I’ll be honest, it is the nearest beaker burial to Ava’s, and I’m keen to see if the two sites have anything in common other than what we already know. Perhaps one day I might be able to source some more funding, and we can investigate the life of this individual as we have Ava’s. But right now, I must get back to writing up our current research and hopefully (fingers crossed) we can revisit this site some day soon.

Shepherd A (2012) 'Stepping out together: men, women and their Beakers in time and space' in Allan, M J., Gardiner, J., & Sheridan A., Is there a British Chalcolithic? People, Place and Polity in the later Third Millenium, Prehistoric Society Research Paper 4, Oxbow books.

(This book is amazing if you're interested in this time period by-the-way, and is currently reduced from £45 to £14.95 on Oxbow books – a bargain!)