We are in the process of updating this page. For more up-to-date information, please consult pages 81-84 of our open access, peer reviewed article which is online and free for anyone and everyone to read.

The diagram, displayed below, indicates which parts of the skeleton survived their 4,200 years underground. Those in bright purple are still a part of the collection today and are normally housed at Caithness Horizons museum in Thurso. The right femur, displayed in dark purple, was destroyed during the original carbon dating programme in the 1990’s.

The human bones were examined by Mary Harman (her full report can be found on the Highland HER record for the site found here). The bones were considered to be in a relatively well preserved state and no evidence of injury or disease was identified.

In 2016/17 a second osteological assessment was carried out on the human remains, details of which will be published in the winter of 2018.

The skull had survived in a very good condition, although the mandible and most of the occipital bone were missing. The cranium was reported as being very short and broad, although there was no sign of distortion. Harman noted that the individual had an exceptionally high cephalic/cranial index. My own measurements suggest a cepahlic index of 89.6, classified as hyperbrachycephalic bordering on ultrabrachycephalic. The skull has been examined recently (December 2015) by a burial archaeologist who has retaken these measurements (awaiting report).

Three examples of skull shapes with the Achavanich individual on the right, my own in the middle, and my partners on the left (Copyright Maya Hoole). Please know that these are the skull shapes viewed from above looking down on the top of the skull.

The skull of this individual is particularly unique. 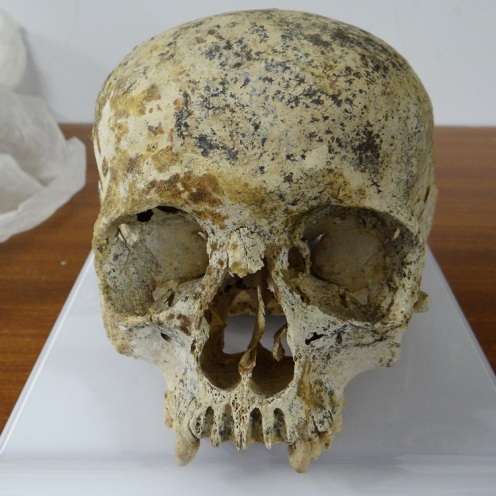 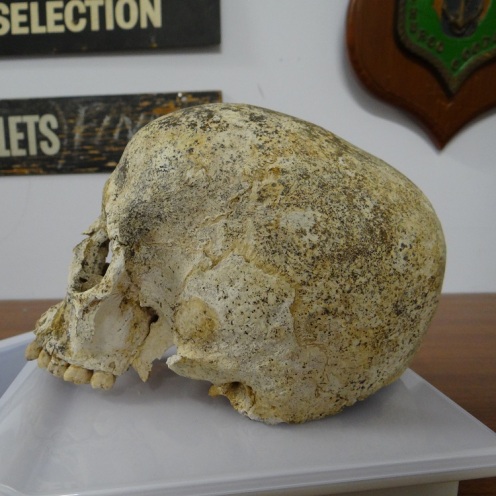 Harman reported that of the twenty-six teeth found, none of them had any caries, there were no abscesses in the upper jaw and there was no evidence of any periodontal disease. There were slight traces of hypoplasia near to the base of the upper first molar crown which suggested that there had been a slight disruption in the diet or health of the individual when the tooth was developing, at an age of about two years.

Most of the skeleton was recovered, although a substantial amount of the upper to mid left side of the skeleton was missing. The reasons for this are not yet known. It was likely this individual was buried lying on their side with their knees drawn up tightly under their chin. They may have been tied in this position for burial. This tradition was common amongst Bronze Age short cist burials.

Although the pelvis was too incomplete to be used for determining sex, Harman noted several other features that indicated that the gender of the individual was female. The skull had no brow ridges, the first sacral vertebra had female characteristics and the small and light size and physique of the vertebrae and limbs suggested that the remains were of a woman.